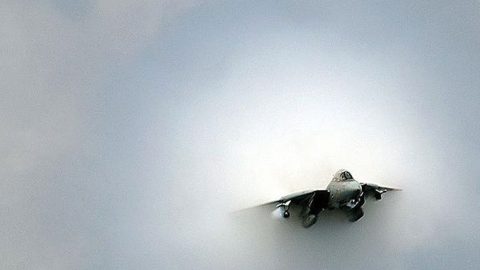 Showmanship At Its Finest.

Fighter pilots are a crazy breed. Naval aviators, however, are something else. Not only do you have to have the same crazy mentality, you need to do things like land on a rocking airstrip (carrier) which is mostly unpredictable. Not to mention navigating a featureless body of water which is also quite a challenge.

Having said that, we now realize that these aviators are not only smart, they’re also adventurous and like to have some fun. This is most likely why we get to see this video.

This video must have been taken sometime before 2006, as that’s when F-14 Tomcats were unfortunately taken out of service. The Youtube video we got this from shows this video was uploaded in December of 2006 too. If we could venture a guess, this was a video taken towards the end of their service, so the pilots probably wanted to show off one last time.

We’re not exactly sure what squadrons or ships are pictured in this video so if any of you reading this know, please let us know in the comments. As for what you’re about to see, it’s simple and awesome.

Someone onboard one of the ships took out their camera and started filming what seemed like a dot on the horizon. Within seconds, that dot became a full-sized Tomcat which was really low to the water surface. Then, it cuts right between the ships.

Absolutely spectacular to say the least.