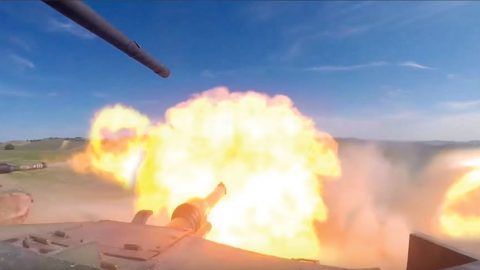 Some Short And Sweet Clip.

Sometimes you’ve got to blow off some steam. When you’re home, you indulge in your activity of choice be it a punching bag or a bike ride. In the Army however, you can do so by blowing some $#*! up. Now, these guys are actually working (yes, it’s practice), but still, we bet doing so feels pretty good.

In this exercise you’ll see not one, not two but three tanks doing what they do best. Using both their front mounted machine guns and turrets, these things pack a lot of power. Also, the video is quite educational if you watch it.

If you haven’t served or at least had limited to no contact with tanks, you’ll get some great POV shots which are perfectly edited in this video. Equipped with GoPro cameras on the interior, exterior and outside of the firing range, you’ll see a lot of different perspectives of this exercise.

For those of you who have never been in an Abrams, notice the size of the cabin. You can barely move. There are sharp edges all over the place and moving parts can literally cut your limbs off. Working this machine ain’t no joke.

For anyone serving, thanks for doing so! We all appreciate it.