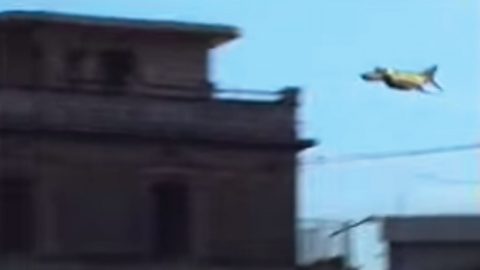 Watch This…It’s So Worth It.

Sadly, F-4 Phantoms are a dying breed. Just a few weeks ago we showed you footage of the last remaining Phantoms flying at Oshkosh. With only two (according to our research) in private hands, those will be the only ones still flying after 2017. The reason is that, as with most outdated planes, they’re being used as target practice right now.

Yup, if you haven’t heard, the DoD is converting all remaining airworthy F-4s into drones and blowing them out of the sky for the purposes of science. Sad, but true.

Videos will never die, however. Although the footage we found here is grainy, it’s still awesome. A Youtube user by the name of Joluqa Malta uploaded an air show he was at in Maltese Bay, Italy.

As you’ll see, he filmed it with VHS (how weird is it seeing that word now) as the show took place in 1993. Quality or not, the pilot of that F-4 Phantom was kicking some serious butt. Plowing between the valleys and flying close to buildings, this is one show we’d love to have seen live.