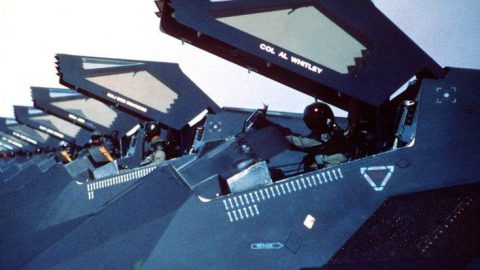 Every now and then there are reports of F-117 Nighthawks flying in the skies over the Nevada desert. Many think that this was a just a conspiracy theory since the stealth jet was retired in 2008. Video evidence shows showed that there was some truth to these rumors but it appears that they are going away for good.

The Air Force has confirmed the use of these stealth bombers a means of keeping their systems alive despite being retired in 2008. However, the United States Air Force has given official confirmation that the F-117 is set for a final demilitarization process. Due to budget cuts, the remaining operational Nighthawks will be removed from service.

“We had to keep all the F-117s in flyable storage until the fiscal ’17 NDAA gave us permission to dispose of them.”

The stealth bombers are more than likely going to end up in Air Force Museums where they will finally have a public presence. Any classified materials or weaponry systems will be stripped from the aircraft at the average rate of one plane per year. Once upon a time, the rumors of their sightings fueled conspiracy theories but now they will be anything but stealthy.