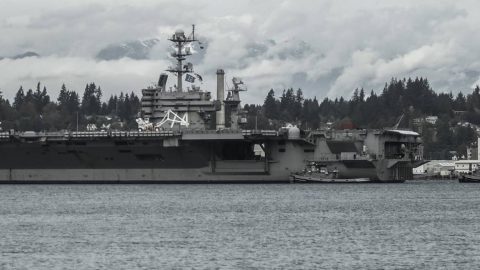 Naval Base Kitsap in Washington is usually a quiet and serene location as vessels come and go throughout the day. The snowy scenery adds a relaxing element to the US Navy crews going about their routine work. However, the base was shaken up after potential terrorist activity was detected and the base was locked down.

Naval Base Kitsap is home to the US Navy’s Trident Submarines as well as a storage facility for several nuclear weapons. It was reported that a man in a black SUV attempted to forcibly infiltrate the base. To make matters worse he escalated the situation by claiming to be armed with an improvised explosive device strapped to his body.

The base was put on lockdown security teams moved in to deal with the hostile individual. The situation lasted about seven hours as they dealt with the tense situation. However, it seems that these claims from the driver were simply just claims as no explosive device was found.

“We have not found any explosive device to this point, but we have not completed the investigation.”

The commanding officer from Naval Base Kitsap issues a statement on the possible terrorist situation in this clip.