This Was The Last Person He Expected To See On Veterans Day, But It’s No Surprise 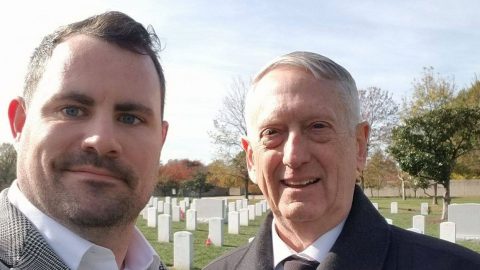 On Veteran’s Day, the United States of America comes together to give thanks to members of service members who dedicated their lives to this country. Although Veteran’s Day is meant to honor living servicemen it is also customary to pay tribute to soldiers we have lost.

David Brown came to Arlington Cemetary on Veterans Day to give thanks to a pair of fallen comrades in a recently laid plot for the recently deceased. Families crowded the more popular areas such as the tomb of the unknown soldier.

Then Brown noticed a man walking by himself through the cemetery consoling family members of the recently deceased. It was none other than Secretary of Defense James Mattis, coming to the side of family members who served. “James Mattis is one of those living legends who transcends politics and ideology. His job is his life, and that job is the welfare of this country and its servicemembers. This Veterans Day, I send a special thanks to James Mattis, for not taking today off.”

Living or dead, those who have served deserve our respect and even those at the top are there to honor them. Thank you, General Mattis.