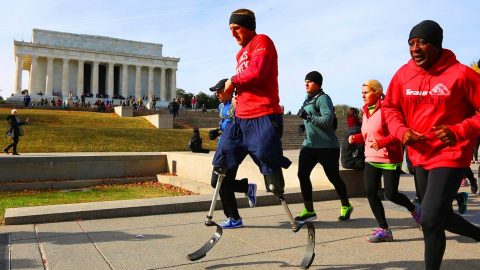 Rob Jones is a veteran of the Marine Corps veteran who lost his legs from an IED explosion in Afghanistan in 2010. Rob had often heard stories of veterans returning from combat only to live broken lives, but he did not want to be one of them. Against all odds, Rob Jones took it upon himself to run 31 marathons in 31 days.

After being discharged from the Marine Corps Rob Jones entered a phase of rehabilitation. During his recovery, Rob refused to stay down as other had in the past. He stayed active learning rowing, bicycling and running again, preparing himself for the 2012 Paralympics. But that wasn’t enough for Rob, he was determined to take his athletic abilities even farther.

Over the course of 31 days, Rob Jones ran 31 marathons inspiring many people joining him along the way. He finished his month-long journey on the steps of the Lincoln Memorial on Veterans Day. His mission to raise awareness for injured veterans was a monumental success against the odds.

“I decided I would create this story of a veteran that was wounded and thrived from it. I think I accomplished that mission.”

His journey spanned over 800 miles of running and raised an estimated $135,000 for wounded veterans. If you would like to donate to the cause, the link can be found here.