Apaches Just Got A Deadly Upgrade – A Fully Functional Laser 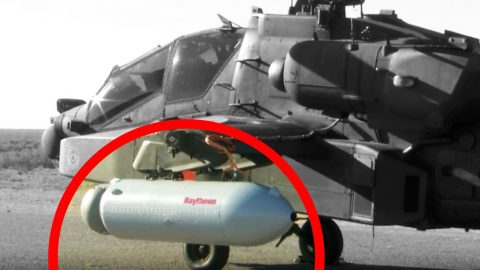 The Future Is Now.

AH-64 Apache helicopters are a deadly instrument of war. Although there are many variants, the combination state of the art sensors and night vision systems find the enemy wherever they hide. Combine with that their 30 mm chain gun and ability to mount Hellfires, Stingers and other rockets and missiles on their wings, they are a scary thing to hover near you if you’re not on the same side.

Now, they got hella scarier, a.k.a., more effective.

Raytheon, a U.S. defense contractor manufacturing anything from electronics to weapons, just tested something they’ve been working on for a while. A small, portable laser system that can be mounted on military vehicles. They just now tested it on the Apache.

Mounting it on an Army Apache helicopter, they tested it on a firing range in New Mexico. According to reports, it performed flawlessly.

As it doesn’t use bullets, the laser doesn’t need to be reloaded. Also, it’s deadly accurate. Unlike bullets or other propelled weapons, lasers shoot perfectly straight taking out any guesswork pertaining to distance, wind and other ballistic nightmares.

We found a video released by Raytheon yesterday of the test. Unfortunately for all us old school war junkies, there is no explosion. No sound or even an indication of the laser firing. It’s silent, invisible, but it gets the job done by heating through its target and destroying it.