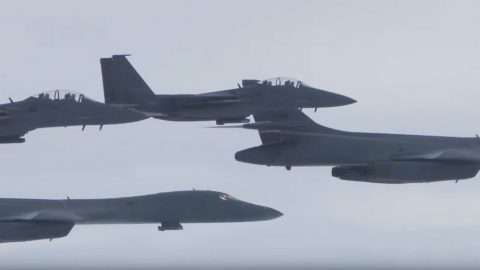 North Korea’s Kim Jong Un has been trying to build an ICBM (intercontinental ballistic missile) capable of delivering a nuclear warhead for years now. Despite stern warnings and other efforts to abandon the program, Kim pushed for his latest rocket test on July 3rd and it was the most successful one yet.

“This mission clearly demonstrates the U.S.-ROK alliance remains prepared to use the full range of capabilities to defend and to preserve the security of the Korean Peninsula and region,” said Lt. Gen. Thomas Bergeson

The missile traveled over 1,500 miles above the earth and hit down almost 500 miles away from the launch site off the coast of Japan. U.S. analysts say that had it been fired straight, it could have possibly reached Alaska.

This marked a significant improvement over their previous launches and now a direct threat to the U.S. and their allies.

The U.S. has been performing exercises with the South Korean military for a long time as well, training both on the ground and in the air.  This one performed on June 7th, 2017, was a little different. This video we just found shows two B-1 Lancers escorted by South Korean F-15s and F-16s as well as Japan’s F-2s (a derivative of the F-16) while they were practicing on the Pilsung Range. They also flew in formation right next to, but not over, the Korean Demilitarized Zone which is only 2.5 miles away from North Korea. The closest they’ve ever been.

This show of force was criticized by the North Korean government, their spokesperson saying, “a small misjudgment or error can immediately lead to the beginning of a nuclear war, which will inevitably lead to another world war.”