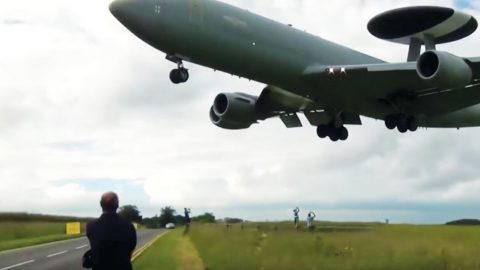 There Are A Couple Of Them Here.

Getting this close to the glide path is pretty awesome as most airports will not allow you to do so. These strips and bases are either tucked away somewhere where you can’t get to them or blocked off so people can’t get too close to them.

It’s definitely not the case here.

Once again, the Youtube channel called bobsurgranny gifted us with an incredible final approach video. We’ve seen a bunch of those, but never an E-3 Sentry.

Made by Boeing, these planes were produced from 1977 to 1992 and are still in service. AWACS or airborne early warning and control aircraft, they are the eyes and ears of the U.S, NATO, Royal and Royal Saudi navies.

Just check out that radar dome as it approaches. It’s huge.