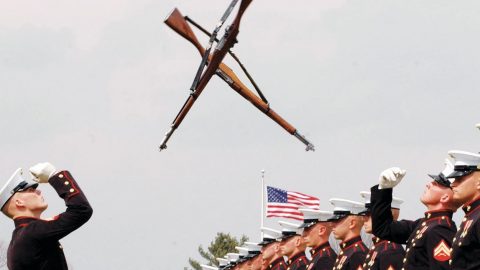 Officially named the United States Marine Corps Silent Drill Platoon, this 24-man rifle display team has been around since 1948. It was supposed to be a one-time event back then, but it gained so much attention that it was performed again and again and serves as a recruitment tool for the Marine Corps.

If you’ve never seen them perform, we recommend you do. It’s one of the most mesmerizing military performances ever. Completely silent, these 24 Marines complete a routine without any direction, relying only on their training and discipline.

In the video below, you’ll see one of the more difficult parts of the show. Although we don’t mean to downplay any other part of the performance, this is not only cool looking but also really difficult to accomplish.

We’re not sure if it’s actually called “double catch” or “double throw,” but it is exactly that. Two Marines throw their rifles up in the air and to each other, all the while the rifles maintaining the same height and rotation.

You’ve got to admit that’s impressive.