B-1 Lancer’s Takeoff Sets Off Car Alarms Yards Away 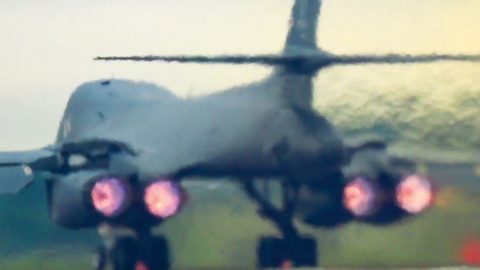 She’s Quite The Beast Alright.

Ahhh, the B-1 Lancer. Sleek, fast and able to deliver quite the punch. With her ability to spread her wings (literally) and fly at supersonic speeds while dropping up to 125,000 lbs. of hurt on anyone that looks at her wrong, she’s quite a force to we reckoned with.

You might have noticed that we really like the Lancer a.k.a. the BONE and you wouldn’t be wrong. This cold war era plane was quite the deterrent when things around the world were tense (not that they aren’t right now.)

Taking flight for the first time in 1974, she was officially introduced into the USAF in 1986 and has served valiantly ever since. As of this writing, there are 104 B-1s still in service. 100 of them are the “B” variant while the remainder are B-1As. The latter are prototypes which were able to reach mach 2.2 while the former are capable of mach 1.25 however, they have a reduced radar signature.

Now that you know a bit about these birds, let’s talk about the video. It was taken on September 5th, 2016. Taking off from Fairford Base in the U.K., she was heading to the Czech Republic. She did leave in style, but not without first setting off some nearby car alarms. With those 4 powerful engines, it’s really no wonder.