Tank Crew Shows Off By Drifting, But Things Don’t Go Too Well 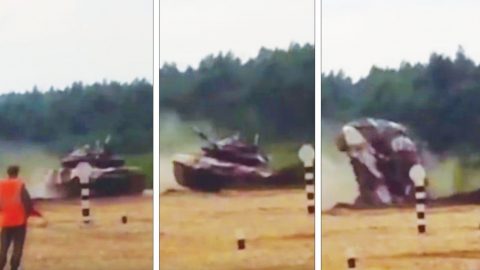 Once Upon A Time In Russia.

Welcome to Russia, a place of vodka and a lot of military might. Put two of them together and you get yourself this here fantastic video. We’re kidding of course, but we needed to put that in there.

Although this video was on the internet for a while now, we just came across it. It seems like people like it, as it amassed almost a half a million views thus far, and for good reason.

This was taken at Russia’s famed Tank biathlon. Starting in 2014, this competition is designed to test the “tank crews including their rough terrain passing skills combined with the ability to provide accurate and rapid fire while performing maneuvers.” This includes the crews firing at targets positioned up to 6,000 feet as well as firing while airborne (yup, they do jumps).

In this video, the obstacle course is designed to make the crews drift into position before going through water. The first two guys did fine. The third crew snagged a mount of soil and well…see for yourself.