B-2 Bombers Demolish ISIS Stronghold With Over 100 Missiles 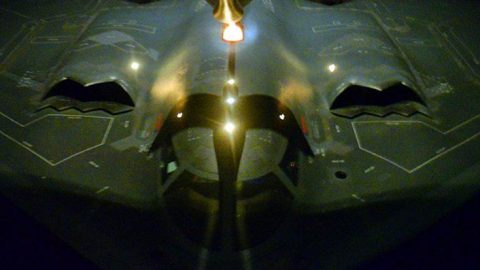 Anyone looking to join ISIS in their mission to spread their reign of terror through the Middle East just a powerful lesson that it may not be such a smart idea. Two ISIS training camps in Libya have been reduced to rubble after a pair of B-2 Spirit bombers launched a bombing strike.

The Two B-2 bombers set off on a 30-hour round trip mission from the Whiteman Air Force Base in Missouri to the Daesh training camp in the city of Sirte. Although there have been several US-led attacks on militant forces within the area, the use of B-2 bombers brings a higher level of intensity towards hostile targets.

“The U.S. has conducted 495 airstrikes in Sirte since August, mostly from drones flown from the region to target ISIS. Marine Harrier jets and Cobra attack helicopters conducted airstrikes as well from a Navy amphibious assault ship off the coast of Libya in August.”

An estimated 85 terrorists were killed in the B-2 bombing strikes after they unleashed their vicious attack. In this declassified video you can see the effect of 108 guided missiles simply demolishing their training outpost.