“SAS of WWII” Took Out 33 German Planes With Their Jeeps 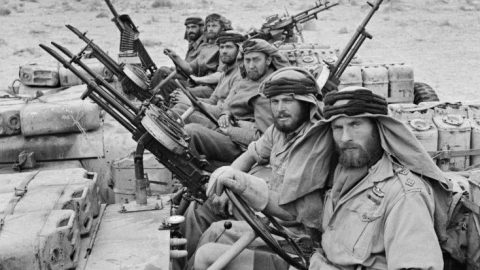 As World War II crept through Northern Africa it became clear that the battle wasn’t going to be won across the desert sand, it was to be won over the skies. Establishing aerial dominance was not going to be an easy task for the Allies, but they found a way of fighting on the ground.

The members of the Special Air Service (SAS) were a unit of the British Army during WWII, with a name intended to confuse the Germans. These men found themselves to be more deadly on the ground than they would be in the air during the campaign in North Africa. You would think that Air Servicemen would be found often in planes but these guys had a great run in their Jeeps.

The SAS jeeps were improvised fighting vehicles armed to the teeth with weapons. These jeeps had as many as five Vickers K Machine Guns, perfectly suited for attacking enemy aircraft. But these jeeps didn’t usually fire at planes while they were airborne, they went on hit and run raids into the enemy airfield and just shot them up at point-blank range.

The speed of the jeeps made them far more effective than tanks, allowing them to maneuver in and out of the airfields. Their machine guns were armed with explosive rounds which even managed to destroy 33 Luftwaffe aircraft during a raid. This legendary raid is explained in further detail with a look at these jeeps of death in this clip from Weaponology.