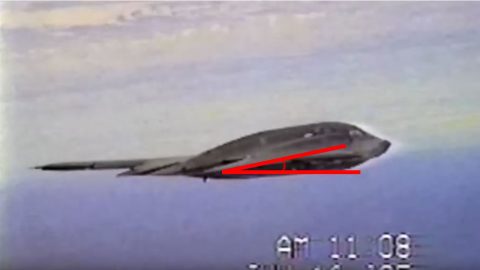 The kicker is that the aircraft, built by Northrop Grumman by the way, first flew all the way back in 1989 and was introduced in 1997 as a heavy penetration strategic bomber. Now, that’s at least what we were allowed to know as the entire process was incredibly secretive.

With such new technology, of course, came years of testing and one of the tests we found was the wing flutter test. It’s actually dated on the YouTube clip we found and was performed (naturally more than once) on June 14th, 1995, two years before it was introduced.

Now, this is an extremely technical subject to explain, so if you’d like to read a bit more into it, just go to the Wikipedia page here. It’ll explain it in a more advanced way if you’re so inclined.

As for us lay people who just love aviation, a flutter test measures the aeroelasticity of the wings. The explanation is in the name, of course, meaning, how much the wings can move up and down while still leaving the aircraft functional and safe and what kind of forces cause that.