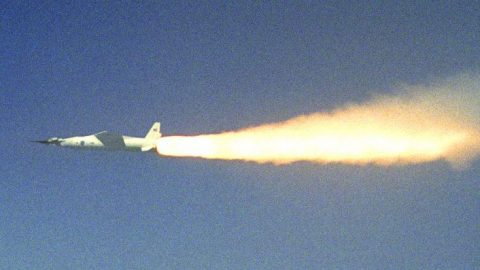 The pursuit of speed is always advancing with many different innovations through the years, from propellers, to jet engines and rockets. Every little bit helps to make an aircraft streamlined to achieve momentum be it for combat, travel or transportation. However, when a group NASA engineers united to push the limits of pure speed they ended up with the fastest aircraft of all time, the X-43.

In 2004 NASA launched an aircraft that would surpass every notion of speed, aircraft are usually impressive at supersonic but they wanted hypersonic. The X-43 was the brainchild of NASA’s Hyper-X program using a newly developed “scramjet” that boosts propulsion to levels never before reached. The X-43 experiment was an unmanned created with the intention of studying the effects of speed on manned flight to establish if those conditions were possible.

“Far outpacing any supersonic aircraft, the three X-43A vehicles were designed to fly at speeds of Mach 7 and 10. Ultimately, the revolutionary technologies exposed by the Hyper-X Program promise to increase payload capacities and reduce costs for future air and space vehicles.”

Launching from a B-52 Stratofortress the X-43 made history that may never be reached again. NASA scientists pushed hard to achieve a speed unheard of before, fortunately, the event was documented in this clip so you can witness the world record of aircraft speed.