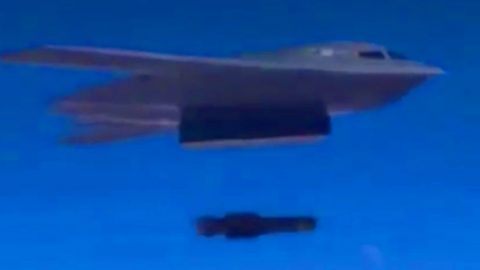 The Northrop Grumman B-2 Spirit is a remarkable creation of aerial combat engineering. Just when you think you’ve seen everything this stealth bomber can do it pulls out some new trick you’ve never seen. So you can imagine our surprise when we learned it is capable of launching 30,000-lb bombs.

They call it the Bunker Buster because they are pretty damn good at blowing up highly secured buildings. Bombs of this kind date all the way back to WWII and were used to target strongholds in Nazi Germany some weighing up to 22,000-lbs. Now in the realm of modern of aerial combat, the concept of the Buster Bomb has evolved quite a bit.

Today’s bunker busters are known as Massive Ordinance Penetrators (MOP). These bombs weight up to 30,000-lbs and are precision-guided for improved accuracy and destructive power. Even the Mother of all Bombs (MOAB) falls under the umbrella of these gigantic weapons.

The ability for the B-2 Spirit to hold a Massive Ordinance Penetrator bomb is incredible because the bomb is nearly half the length of the aircraft. See this B-2 unleash a gigantic bunker buster to get a sense of just how big that bomb really is.