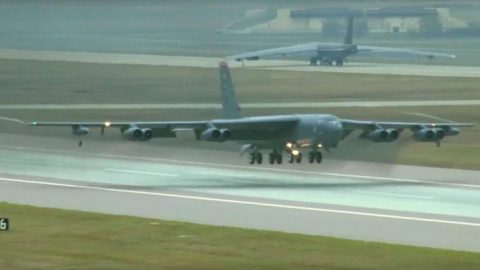 During the Cold War, the United States and the Soviet Union were at odds with each other and a conflict could break out at any moment. In the event of war, the US Air Force flew B-52 bombers in a pattern around the globe 24 hours per day ready to strike. The world calmed down and the B-52s went home, but now it was announced that they will be returning to high alert.

It is no secret that there are more than just handful of nations making threats about nuclear war so the United States Air Force insists on stepping up their readiness. Tensions are rising amid nations like North Korea, Russia and China so having nuclear capabilities may deter the hostile nations from threatening possible attacks.

“It’s no longer a bipolar world where it’s just us and the Soviet Union. We’ve got other players out there who have nuclear capability. It’s never been more important to make sure that we get this mission right.” This is the first time since the Cold War ended in 1991 that B-52s have been on high alert circling the globe. The following link provides additional coverage to the developing situation.