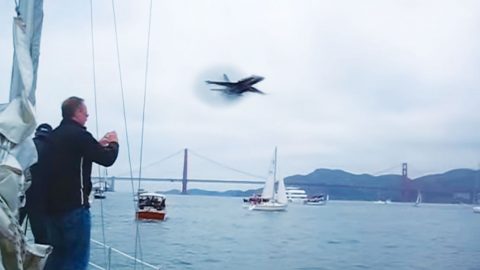 A Good Reason To Own A Boat.

It’s funny how one of the coolest Blue Angel videos was sent to us from a city that was trying to ban them just last year. Yup, San Francisco residents were up in arms about the noise level of the jets scaring old people and dogs (this is true, read the news post here) and how it’s a waste of tax dollars. Hmmm…we guess it’s better to spend a couple million dollars on recruiting commercials and not this show. Riiiiight.

Although a select few brain dead people tried to ban these guys, many still love them. Take the people in this video for example. The ones who had boats took them out near the Golden Gate bridge and waited for one particular part of the show, namely, the sneak pass.

When you attend the show, this maneuver scares the crap out of you. Four of the Blue Angels fly in formation in front of you, while the Solo doubles back behind the crowd and buzzes them. It’s really an incredible experience.

In this video however, you’ll see the doubling back of the solo and it’s actually much better. Although the people on these boats are not close to the action by the runway, they did get to see one of them loop around and get ready for the sneak pass.

He was over water. He was low. He was fast. This is the type of flyby that makes us scream out with patriotism just like the people on these boats.