This Brief History On U.S.’s Nuke Mishaps Might Make Your Jaw Drop 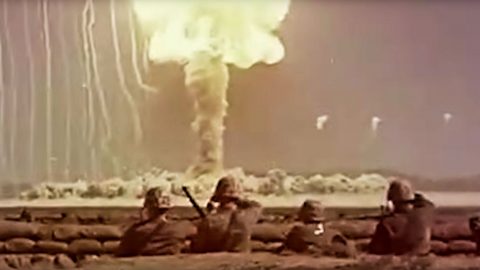 What’s The Worst That Can Happen?

Since the United States dropped their first nuclear bomb in 1945, there were another 1,055 known detonations performed until 1992. All but one of those were tests. In 1992, George H. W. Bush declared a unilateral ban on nuclear testing and the U.S. never detonated a nuke again, although simulated tests are frequently performed.

Broken Arrow is a term to describe an accidental event that involves nuclear weapons or nuclear components but does not create the risk of nuclear war.

This doesn’t mean that accidental explosions are out of the question. This isn’t a fear-mongering assumption nor a hypothetical statement to discuss for fun. This video will explain the frailty of these devices and that there have been 33 incidents which nearly resulted in accidental detonations. These are the ones we’re allowed to know about of course. There could be countless others.

Keep in mind that the United States has to maintain about 7,100 of them, so that’s a lot of potential accidents. Don’t worry though. If you’re a believer in statistics, 33 is not a high number compared to the thousands if not millions of man hours spent maintaining the nuclear stockpile for over 8 decades.