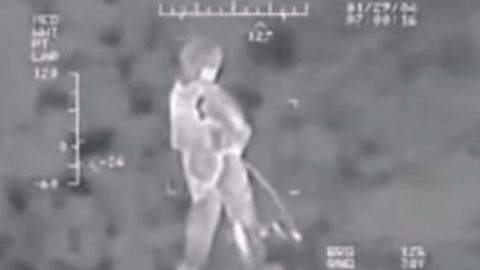 As any fighter pilot will tell you, flying is hours and hours of boredom sprinkled with a few seconds of sheer terror. If we think about it, it was Pappy Boyington who said that when talking about flying his Corsair during World War II.

As flying could be considered boring sometimes (although for non pilots every second would be thrilling for a long while) that time needs to be filled. Whether in the field or during practice, when an opportunity presents itself, you should take advantage of it.

In this video, we have a Blackhawk crew flying around. Using their FLIR system, they spotted a guy in the woods trying to relieve himself. By the looks of his gear, it might have been a fellow pilot.

While in full stream, they pulled up to him so their prop wash made it impossible for him to finish without making a mess of himself. When he moved and braced against the wind, they naturally followed him.

Hey, although not that nice, these guys know how to have good ol’ fashioned fun and mess with their buddies. Fly on!