Bystander Captures The Only 25 Ship Nighthawk Formation Ever To Be 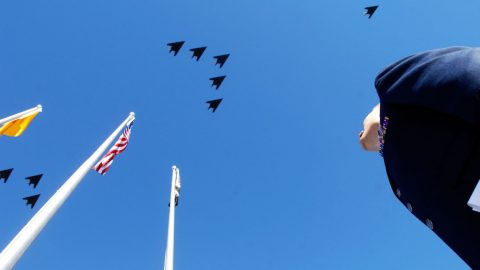 It’s A Good Thing This Was Just A Show.

At one point in time, Lockheed’s F-117 Nighthawks were the most secret military aircraft ever built. Aside from the government and people who were building it, not a soul knew about them. Their stealth technology was so advanced that from its genesis in 1975, it was not revealed to the public unit 1988.

Once that happened, well, these stealth attack aircraft struck fear into enemies, as it was one of the most advanced aircraft of the time. It’s no wonder then that in order to show off the might of the United States, what you are about to see came to be.

Only one Nighthawk was lost in combat and was shot down by a surface-to-air-missile in 1999 over Yugoslavia.

For their 25th anniversary on October 27th, 2006, a total of 25 F-117s flew over Heritage Park in Holloman Air Force Base. To say that the sight was majestic would certainly be an understatement. Also, their distinctive sound multiplied by 25 is something spine-chilling.

Although they were retired in 2008 and replaced with F-22 Raptors, they are still one of the most unique looking planes ever built. This video is proof of that!