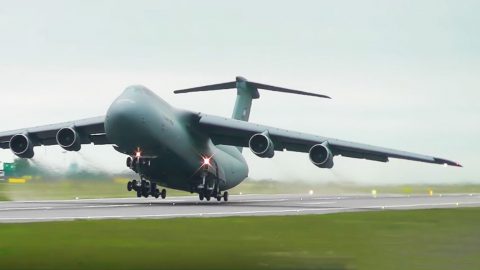 Facebook and the internet, in general, are filled with a lot of yellow journalism, meaning, they over exaggerate. Although this might seem like one of those posts, it’s really not. Seeing a C-5 take off is really an event to witness at least once in your life.

Hearing this C-5 spooling up right before take off is one thing. Watching it then move forward and almost immediately take off is another. We know that it’s probably going faster than it looks in the video, but when you take a look at it, it seems like this behemoth is barely moving. Then, it just lifts off.

C-5 Galaxies is the largest military aircraft in the world. It’s expected to fly beyond 2040 according to the DoD.

According to the description on Youtube, this takeoff happened in Gdansk, Poland. Apparently, it was the first time in 27 years a C-5 Galaxy visited the country, so it attracted a lot of people.

If you’ve never seen one take off, we recommend it. These folks knew what they wanted to see and they did. We don’t blame them.