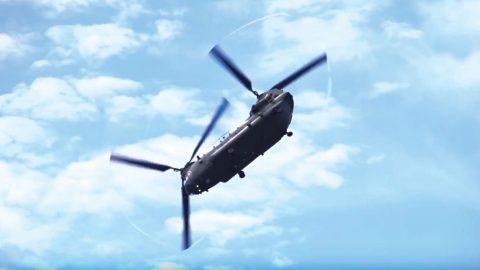 The More You Know.

This is something cool that we found when perusing the world wide web, a place where you can find anything and everything, and sometimes nothing. In this case, we actually found something we figured is cool so here you go.

Chinooks are some of the most useful transport helicopters the U.S. military has used. First entering service in 1962, these helis are not only still in service, they’re also still produced as of this writing. Since their inception, there were over 1,200 of them produced.

Not only are they useful and proven, they are surprisingly maneuverable despite their appearance. Their crews are know for flying into hard to reach spots and performing the pinnacle maneuver for quick insertions and extractions.

These blade tip vortices are created from condensation and differences in air pressure on the top and bottom of the blades.

Now that you know a bit about them, check out this video. As we mentioned above, they’re maneuverable and as you’ll see taking a steep dive is no problem for them. The guy who filmed this however, showed us something more.

When he slowed down the footage, you can see blade vortices! It’s not the most exciting thing in the world, but you typically don’t see that because the blades are moving too fast. You can clearly see them in the video however, but if the Youtube link is too slow for you there’s a way to speed it up to twice the speed. It’s still slow, but the video moves along quite nicely.

These are not “chemtrails” though. Don’t even get us started on that. Thanks.