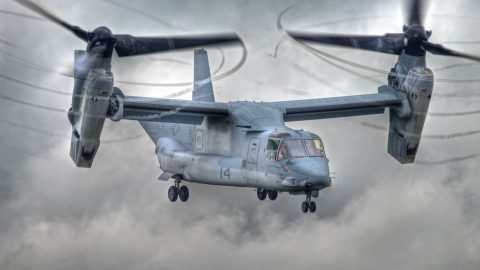 This footage was taken during the Weapons and Tactics Instructor course at the end of September, 2016. Conducted in Yuma, Arizona, a Marine Corps MV-22B was taking part in an exercise to test both the airborne crew’s and the marine’s readiness for combat. This included both evasive maneuver and flare dispersal assessment.

If you’re not familiar with the Osprey, let us give you a few quick facts. Designed out of necessity to “take off and land vertically and also carry combat troops and do so at speed,” the V-22 is to eventually replace CH-47 Chinooks and variants of Ch-53 Sea Stallions.

The V-22 Osprey was designed and built by a collaboration between Bell Helicopter and Boeing Rotorcraft Systems.

What makes them unique are of course the tiltrotors. Able to take off and land like a helicopter, the rotors can then be angled horizontally. This allows the Osprey to travel up to 316 miles per hour. That’s much faster than a typical helicopter.

One thing that we’re wondering though. Since V-22 Ospreys are both fast and maneuverable, are they going to be eventually turned into gunships? Seems like that’d be a good idea. (Just thinking out loud.)