Controversial Footage Of A Quadrotor Fitted With A Machine Gun 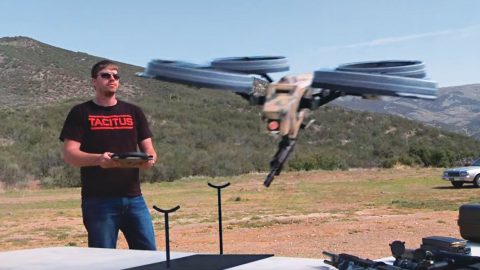 If This Is Real Then Game Over.

We believe that this definitely falls under the heading of “aviation.” Drones have been flying for the Navy and USAF for decades now, so a remote controlled quadrotor being weaponized in not out of the question. With technology moving ahead everyday, there are definitely things at DARPA’s labs that we couldn’t even fathom.

But how does such a thing make it into the hands of a civilian?

The Youtube channel where we found this is called FPSRussia. With over 6 million subscribers, this is one legitimate source of videos that deal with weapons. The host of this “show” is a well recognized guy that has gotten his hands on anything from World War II era tanks to the latest, most sophisticated weapons.

Having said that, it would seem that if technology like this existed, he wouldn’t have much of a problem showcasing it. There is however, the doubt that this technology exists.

There are the questions of legality and FAA regulations. If it’s military grade and these rules don’t apply, how did the get it?

What about recoil? How does it counter such force with only four little props? Then there’s the question of weight and magazine capacity.

We want to believe this is possible, but when we spent some time reading through comments and other sources such as Gizmodo, there are skeptics saying that this was a publicity stunt to promote a new game that was coming out at the time.

What do you guys think? Fake or real?