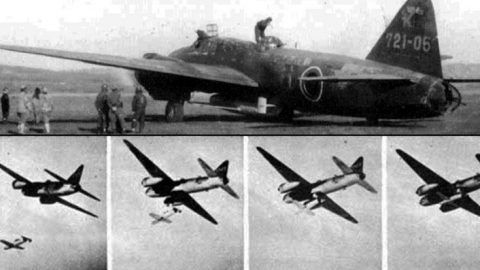 In the final stages of WWII, the Japanese created many weapons that instilled fear into American sailors. Japan was losing the war but their will to fight was stronger than ever. Not only were they willing to fight, but they were willing to die and take down as many Americans as they could with them.

As Japanese desperation grew, so did the kamikaze attacks from Japanese pilots. Aside from using their fighter planes for suicide attacks, they made specific aircraft for kamikaze such as the Yokosuka MXY-7 Ohka. The Ohka would be launched from a larger plane such as the Yokosuka P1Y Ginga and propelled with rockets into a target. It is steered by a pilot who gives their life to hit the front end of the Ohka which is essentially a giant torpedo.

“They were also fitted with additional armor for the pilot and fuel tanks to protect them upon an attack approach) then dropped to glide towards the designated target before igniting its rocket engines for a high-speed diving attack on a ship. It was also planned to be able to launch later Okha variants from land-based catapults (from caves and airbases) if an Allied invasion occurred on the Japanese home islands (Operation Olympic was the proposed Allied invasion of Kyushu Island).”

Usually, unskilled pilots were selected to give their lives in the Ohkas while better pilots remained in fighters. There are about 800 of these planes made and only had mild success destroying Allied vessels. You can view this authentic WWII of the Allies in combat against an assault of Ohka bombs in the final days of the war in this clip.