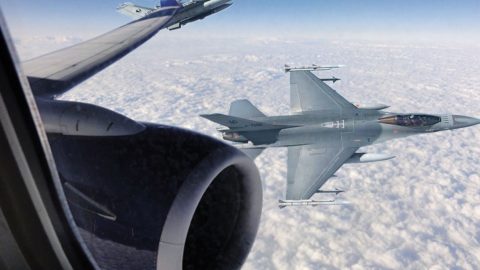 This Just Came To Light.

On May 19th, 2016, EgyptAir flight MS804 disappeared from radar over the Mediterranean Sea. There was no distress call made to air traffic control, the only clue being that there was smoke detected in a lavatory. The investigation is still underway with no definite answers. Every piece of evidence does point to an onboard explosion however.

Although this terrible tragedy is closely followed by major media outlets, there was another incident that same day that went mostly unnoticed. That was Delta Airlines flight DL8957 from Germany to Kuwait.

Just a few hours after MS804 disappeared, the Delta flight was also flying over the Mediterranean Sea and was not responding to calls, although air traffic controllers were next to screaming as they feared a possible hijacking.

With no response for some time, the Ministry of Defense was called and two F-16s were scrambled to intercept the plane as is standard protocol.

The F-16s approached the Delta flight and tried to make radio contact again and multiple times, but were met with silence. One fighter pulled ahead of the passenger plane and used light signals to see if they’d respond. They didn’t, although the other F-16 pilot saw the two pilots in their seats in the cockpit.

Here’s the kicker. As you’d imagine, the passengers who could clearly see two fighter jets pull up next to their windows were getting frantic. Not knowing what was going on, they alerted all the flight attendants to what they saw out their windows.

The attendants went over to the cockpit and had to bang on the door multiple times before the pilot finally opened the door.

They were asleep the whole time.