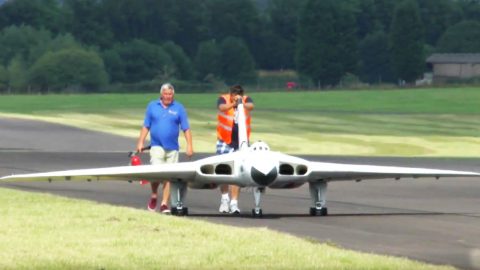 Wow, Not Only Is This Model Impressive, That Emergency Landing Was Too!

Both the real and model versions of this plane are extremely rare and impressive. With a wingspan of almost 100 feet, top speed of 645 mph and range of 2,607 miles, this warbird was very versatile.

Originally a strategic bomber used by the Royal Air Force, it was also used for maritime radar reconnaissance as well as aerial refueling. An amazing plane, it’s no wonder this hobbyist chose to model it!

This piece of engineering is just spectacular. Dave, the man who made it, and his team spent three years designing and building this 1/5th scale model, with the end result being what you’re about to see.

The plane is also powered by four Jetsmunt 160 gas turbines which need 5 gallons of fuel to keep them running. Amazing in every way, this video could have been the last one of this plane. Upon approach, you’ll see that the left engine had a flameout with the Vulcan having a hard time staying straight.