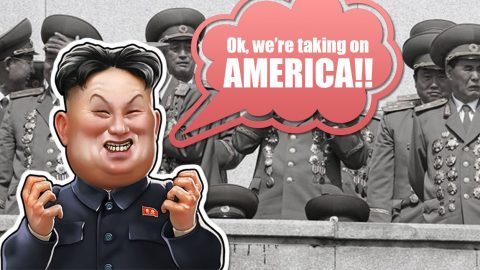 They Have To, Right?

﻿With all that’s been going on in the world lately, it’s really difficult to wrap your head around it, let alone remain sane. Russia this. China that. In the middle of it all, of course, is North Korea.

Sure, we should be a bit worried about a rogue state that’s trying anything and everything to get a nuclear warhead on a ballistic missile, but at the end of the day, we all know nothing will come of this. There will be no mushroom clouds and no nuclear winters.

Which brings up the point, “these so-called generals have to know that, right?”

Behind all the smiles and handshakes for photo-ops with Kim and threatening to “wipe the United States off the face of the earth” as he often says, his top brass must be thinking that their 60’s era jets and joke of a Navy don’t stand a chance in a war.

The funny thing is that their uniforms are plastered with medals that are making their jackets split at the seams, yet, they haven’t been at war since the Korean War. That’s some 60 plus years ago if you’re counting.

We were going to compare the actual military numbers here to show that to you folks but we just have to show one single statistic.

The U.S. has some 7,500 active military aircraft for example. State of the art or retrofitted to modern standards of course. North Korea you ask? Less than 1,000 of which most are from the 50s and 60s.

The question now is, what is the real state of mind of those generals smiling behind Kim as he speaks of destroying the U.S? Are they brainwashed to the point they think this is an actual possibility because they were told they’re superior all their lives?

Or, and this is what we’re getting at here, are they real generals with actual tactical and strategic experience who know they’re absolutely screwed if Kim pokes his stick too far?

To add insult to injury, let’s take a look at their latest propaganda video. This is real. They made this. They believe it. Enjoy it and let us know what you think.