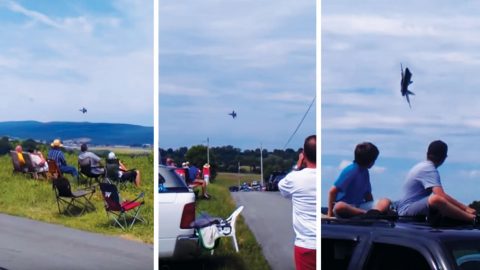 Can You Imagine How Loud That Had To Actually Be?

This video was uploaded back in 2012, so we’re sorry for being more than 4 years late with this at this point. We’re actually surprised. We scour Youtube on a daily basis and have probably seen a couple hundred videos of the Blue Angels at this point, yet, this one escaped us. Luckily, it was simply recommended to us by one of our fans so….here ya go.

Put on Youtube by a subscriber by the name of OakleyFlak, this video is quite different than what we’ve been showing you in the past.

Typically, we’ve selected crisp, polished videos taken by professionals. They look and sound great, but they’re always filmed from the side of the runway (a couple were not, but most are.) This means that you typically see them from one or two different angles which is cool, but it gets old.

Here, we get a whole different perspective. These people weren’t AT the airshow, but on a road outside of it. Although the main passes were on the airfield, this brings in a while new focus. Once the “main maneuvers” are performed over the crowd, the Blues then need to double back to go in for another pass. That’s exactly where these folks were.

Check out how frickin’ low that solo was when he was heading back toward the airshow. Right on top of those kids! Bet they’ll be talking about this for forever.