This Paratroopers Awful Mishap Will Make You Hold Your Breath 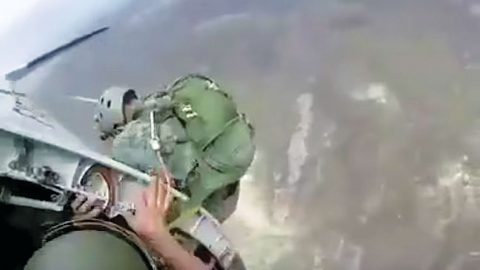 This is one of those videos that really do make you hold your breath, as you’re trying to see what will happen next. It’s scary, uncomfortable and you’re just hoping everything will turn out alright. And that’s just watching the video. Now imagine being the guy in the video, completely helpless and on the brink of death.

This video was uploaded by GlobalLeaks News, a Youtube channel which gets these types of military videos quite frequently. It was uploaded just a few days ago, so we’re guessing that the incident occurred sometime around October 20th.

Remembering his training even in this dire situation, the paratrooper curled up protecting his head. Nice work man!

According to the description, this was an exercise performed by Ecuadorian Paratroopers. It doesn’t show the actual jump and the unfortunate paratrooper getting snagged, but someone started filming this when he was already pinned to the side of the plane.

As a paratrooper, this is one situation you never want to find yourself in. Between the parachute not deploying after being cut loose, you not having enough time to right yourself, possibly hitting the horizontal stabilizer or getting tangled up and doing all of the above, this sucks plain and simple.

We aren’t going to tell you how this ends. Watch the video and see for yourself.