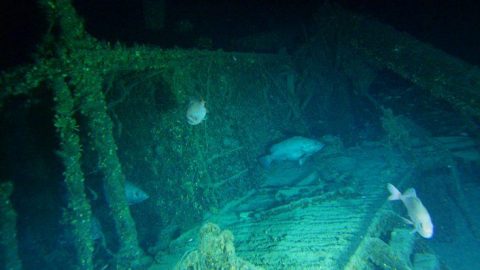 “Loose lips sink ships” is a phrase commonly used in American WWII propaganda but it held more truth than most people thought. Now many people know that the carnage of WWII actually hit the east coast of the United States. Just weeks after America declared war on Japan, Nazi Germany dispatched U-boats to the East Coast of the United States in a conflict known as The Battle of the Atlantic. The German submarine U-576 would target cargo ships en route to Europe and spread chaos through the east coast. U-576 would sink four major cargo ships before it was targeted by aircraft sunk with depth charges. U-576 has sat at the bottom of the ocean off the coast of North Carolina for 75 years. Two years ago the wreckage was discovered by the National Oceanic and Atmospheric Association and for the most part, it has remained undisturbed.

“When I see this area, whether I’m on the surface or we’re down underneath, I see Gettysburg before it was designated as a national park. I see Shiloh, I see Antietam. This is our opportunity to say publicly and acknowledge that the people that fought here off the coast of North Carolina and the U.S. East Coast, that effort is appreciated and it will be remembered.” Now they are finally dispatching submarines to investigate the submarine which is still sealed with the bodies of 45 German sailors onboard. You can view the exploration of this expedition in this clip.