This Behemoth Armored Gunship Annihilated Every Target It Engaged 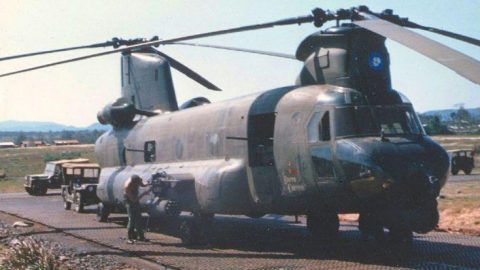 The troops in the Vietnam War were constantly on guard, surrounded by enemies that could ambush them at any moment. American soldiers needed crucial ground support and bombing strikes weren’t always the most accurate method of deterring enemies. Fortunately, the Boeing ACH-47A Chinook was the gunship the troops needed. The ACH-47A began as an experimental aircraft nicknamed “Guns-A-Go-Go” as a means of upgrading normal CH-47s with over 2,600 lbs of armor and weapons. These fierce attack helicopters were equipped with two 20 mm cannons, a 40 mm grenade launcher, five machine guns and rocket launchers. Only four of these gunships were built due to production high costs, the Easy Money, Birth Control, Stump Jumper and Co$t of Living. The Military was reluctant to upgrade normal CH-47s to gunships preferring to use them as transports for troops and cargo. The ACH-47As succeeded in every combat mission they engaged in. Unfortunately, three of them were lost in freak accidents and could not use their remaining one because they were meant to operate in pairs.

“Since the Army would not allow the last ACH-47A to operate alone, plus the fact that lift helicopters were badly needed in the field, the program was canceled. ‘EASY MONEY’ was transferred back to Vung Tau, where she served as a maintenance trainer with the ‘in country’ Boeing Facility until the end of the war.” After Easy Money’s time as a trainer, it was transferred to the United States Army Aviation and Missile Command for a permanent display. We Are The Mighty has proved a short video of the ACH-47A Chinook in action in the link below.