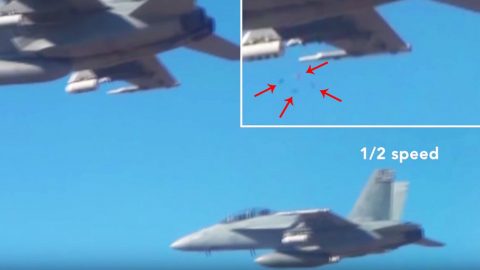 If you look it movies that were made in the past decade, all the sci-fi ones have drones with cameras, weapons and do things that save human lives. You think to yourself “man, the future is going to be awesome,” yet, people often don’t realize that some of these concepts are already here in the present day. Also, there are many others that are probably out there that we’re not allowed to know about.

Although this experiment happened in October of 2016, the DoD just recently released the video of it. The video might not be crazy exciting, but just think about what you’re looking at for a second. This is some futuristic tech that’s flying around TODAY!

“Due to the complex nature of combat, Perdix are not pre-programmed synchronized individuals, they are a collective organism, sharing one distributed brain for decision-making and adapting to each other like swarms in nature…because every Perdix communicates and collaborates with every other Perdix, the swarm has no leader and can gracefully adapt to drones entering or exiting the team.”0SCO director William Roper

The Perdix are small, about 6.5 in. by 11.8 in., drones that were developed by MIT. Adapted for military use, they are now tested to be used for ISR, or, Intelligence, Surveillance, and Reconnaissance.

What makes these little drones special, however, is how they are controlled, or, not controlled for that matter. For this experiment, 103 were packed into flare dispensers of three F/A-18 Super Hornets. As you can imagine, it wouldn’t be efficient to have 103 people controlling each individual drone, but that’s not necessary. These bad boys are autonomous once given a function.

The infrared video at the end will show you how the swarm moved from point “A” to point “B” totally on its own and in almost perfect unison.

As for the chilling sound, well, imagine being an insurgent and hearing that in the distance without knowing what the hell it was. Scary to say the least.