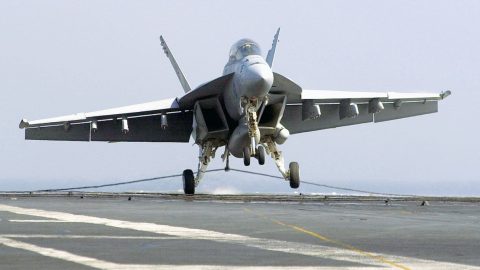 Just Another Day At The Office.

We’ve made the mistake of accidentally calling a Navy pilot a “pilot” once, only to be basically publicly lashed. Yes, we know the difference as it shows in their everyday performance.

So what we have here is a Naval AVIATOR who needed to land his Hornet in less than ideal conditions. With seas being a bit rougher than usual, you can clearly see the horizon appear and disappear several times while the Hornet was approaching. Then, the perfect touchdown.

The quality of this video isn’t the best but you can clearly see what happened. Also, according to the description, this was taken aboard USS Abraham Lincoln (CVN-72) in the Persian Gulf back in 1993 so the quality makes sense. This might bring some of you folks back too, and we hope it’s mostly good.

This best part, aside from the landing of course, is one of the deckhand’s reaction. His outburst of laughter is pretty epic when he sees the Hornet approaching. Must have been one of his first, or maybe conditions were even worse than we can see in the video. Either way, stellar job.