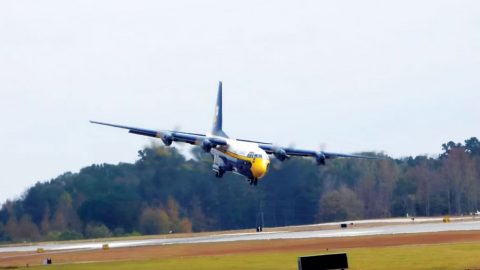 When it comes to flying, few pilots do it better than the Blue Angels. Sure, you have the USAF’s Thunderbirds and UK’s Red Arrows among many others, but for us here at Frontline, the Blues stand tall above all.

What many people don’t realize, however, is that there’s more to them than the jets and unless you’ve been to one of their shows, you’d never know it. The Hornets steal the show of course because they’re fast and sexy, but their C-130 named Fat Albert is quite a thing to witness too.

Used to transport other crew members and extra equipment, Fat Albert is in fact used for what it was designed for. It is also a part of the show.  As mentioned above, this fairly large plane can be flown in a pretty entertaining way and let us tell you; we’ve seen it live and it’s absolutely awesome.

Check out the last bit for yourself.