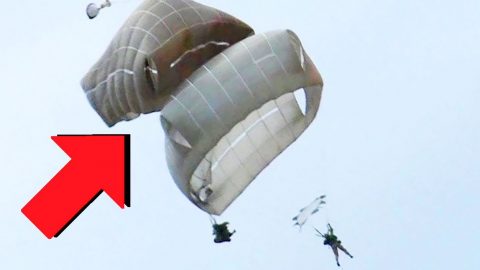 In mid-November, 2017, U.S Army paratroopers performed a joint exercise with Serbian troops in an effort to strengthen NATO ties. There was a bit of a snag though.

The operation was dubbed Double Eagle.

During this massive drop, however, things didn’t go exactly as planned. As you’ll see in the video below, two paratroopers got in a bit of a tangle and had no choice but to go down together. The paratrooper coming in from the top couldn’t avoid the guy below him causing him to thread through one of the outlets of the parachute.

The two U.S. Army Paratroopers involved were luckily uninjured and the rest of the exercise continued as planned.