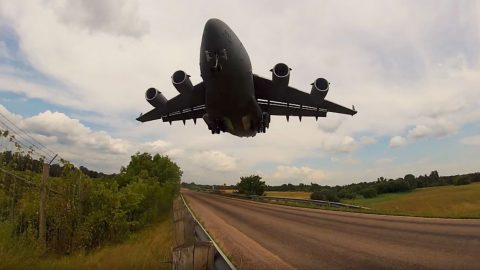 Get In The Slope. The Glide Slope.

This footage comes to us from a Youtube subscriber by the name of Jones10395. He took this awesome video at Ft. McCoy in Wisconsin back in 2013. He set himself up perfectly against the fence separating the public area from the landing strip, so basically, he got as close to this massive Globemaster III as possible.

Boeing’s C-17 Globemaster IIIs were first introduced in 1995 and although they’re expected to be in service for a while, had their production cut off at the end of 2015.

Now, from what we know from the description of the video, this footage was caught on a GoPro. Because of that, the video is actually nice and crisp at 1080p, however, it’s a bit deceiving. GoPros have a slight fisheye lens distortion, so the sides of the video are a bit elongated.

This does not mean, however, that the plane wasn’t super low. If it was us, we probably wouldn’t have the cajones to stand there, but we’re glad this guy did.

Check it out. The sound is sick too and won’t blow out your eardrums.