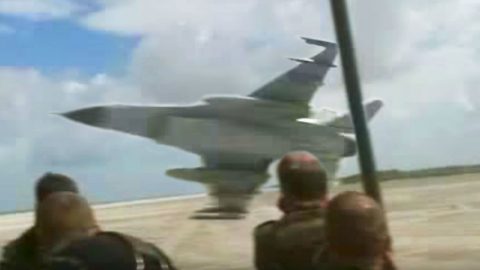 No matter who you are, you’ve got to admit that the F-16 Fighting Falcon is one sexy fighter jet. Although we are really biased as our first loves were World War II warbirds, but if we had to pick a jet, F-16 would be it.

Its design is phenomenal. Its small size, sleek lines, and overall performance make it one of the most timeless aircraft ever. This is an opinion, sure, but man, that thing just looks great. Kill us for saying that if you want to.

Getting to the point, we found a really great compilation of this exact plane. Fighter jocks are known for doing some crazy stuff, and this video proves it. By crazy though, we don’t mean “irresponsible” per se. It’s more that they love to push the envelope by going lower and faster.

This video proves it. These dudes are booking it not only to have some fun but to also give the grunts on the ground a show. Morale is important, and what else will get you screaming “hell yeah” other than an F-16 buzzing by your face?