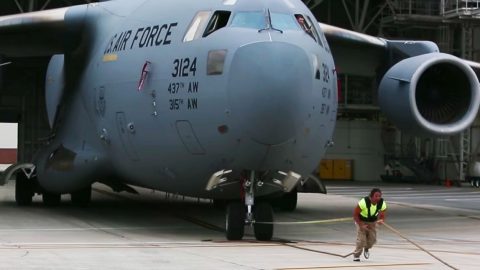 That’s Nothing. He’s Going For Something Even Bigger.

On March 23rd, 2018, strongman Mark Kirsch went to the Joint Base Charleston in South Carolina to casually pull a massive transport aircraft out of a hangar. When you see the video below, you’ll see that “casually” might just be the word.

Built by Boeing, there are 279 C-17 Globemaster IIIs in service as of this writing.

Kirsch has been performing these sorts of routines for over a decade now. A bodybuilder, he found he had a knack for strapping in and pulling anything from firetrucks to jumbo jets. For this event, he’s pulling a C-17 Globemaster III.

C-17s were introduced to the Air Force in 1995 as “large military transport aircraft.” Only surpassed in size by the C-5 Galaxy, this behemoth has a payload of 170,900 lbs and can transport 134 troops. The aircraft’s empty weight is 282,000 lbs., which is what Kirsch is pulling.

As a side note, this was just practice for him before the big airshow on April 28th, 2018. During the show, Kirsch will attempt to do something that’s never been done before. He’ll try to pull the C-17 Globemaster III out of the hangar, up a ramp and onto the runway for everyone to see.

As you can imagine, this is not a small feat.