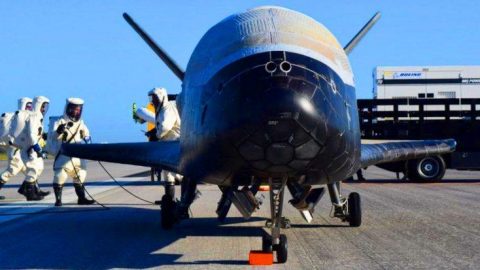 There are a lot of planes out there and some are bound to fly under your radar, but then there’s the X-37B which flew over everyone’s radar. The arrival of this mysterious plane came as a shock to the NASA staff who had no idea it was arriving. Some of them didn’t even know the X-37B existed.

The X-37B landed safely at NASA’s Kennedy Space Center after spending 718 days on a classified mission in orbit. The unmanned orbiter features highly advanced systems for reconnaissance, room for a large payload and is solar powered. Although many details of the X-37B’s mission remain classified, some members of the program were able to reveal details.﻿

“This mission once again set an on-orbit endurance record and marks the vehicle’s first landing in the state of Florida. We are incredibly pleased with the performance of the space vehicle and are excited about the data gathered to support the scientific and space communities. We are extremely proud of the dedication and hard work by the entire team.”

The X-37B was designed for orbital takeoffs with relative ease, not required massive rockets to leave the atmosphere. NASA has released footage of the secret spy plane’s arrival in this clip, pretty exciting stuff.