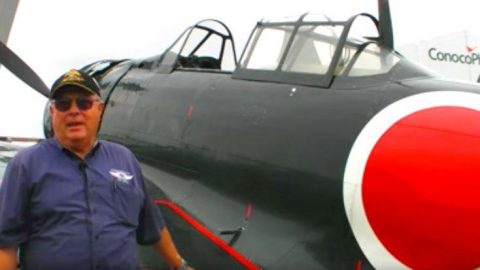 The A6M Zero is still a marvel of aircraft engineering, this plane could outpace just about anything in a dogfight. The Zero was all about speed and agility for enhancing its combat performance against planes over the Pacific. It had no armor except for the chair of the pilot, it also lacked self-sealing fuel tanks or anything else that would increase its weight.

The Commemorative Air Force has the world’s only remaining original A6M Zero still capable of flight. Steve Barber has spent years researching this Zero and has gathered a wealth of knowledge about how it works and how it changed aviation.

“There is, nevertheless, the fact that Japan had a contract with Pratt & Whitney before WWII in which P&W provided engines for fighter planes and other aircraft. It is, therefore, conceivable that some of the planes participating in the Pearl Harbor attack could have been powered by American engines.”

Check out this interview with Steve as he reveals some pretty startling finds about the technology of the A6M Zero. It just goes to show you what years of dedicated research and experimentation can uncover when you really push yourself hard.