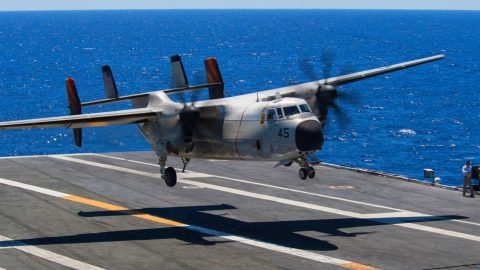 The United States Navy is reporting that a Grumman C-2A Greyhound has crashed off the coast near Okinawa, Japan. A crew of 11 passengers was aboard when the cargo plane went down. The USS Ronald Reagan is conducting a search and rescue operation for the lost crewmen and an investigation is underway.

The C-2A Greyhound went down during a routine training mission with the Japan Maritime Self-Defense Force. So far eight of the passengers have been rescued from the scene but the other three remain missing as the search continues. Officials from the United States Navy have delivered a statement about the incident as teams scramble over the area.

“Our sailors are in my thoughts and prayers as we perform search and rescue operations for a downed aircraft in the Philippine Sea. Eight of eleven sailors are safe and sound on USS Ronald Reagan.”

As the rescue effort continues and although the cause of the crash is unknown some have voiced concern about the use the C-2A Greyhound despite its age. At this point, all we can do is hope the best outcome that the remaining crewmen are found quickly and safely.