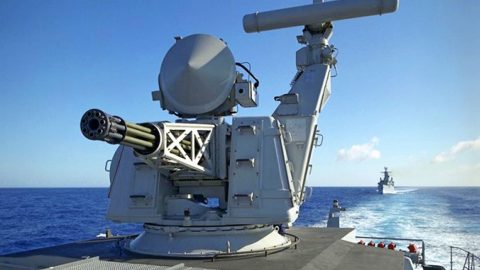 This isn’t exactly news, but the full capabilities of this technology have been implemented just last year. The funny thing is that the Dutch Navy, in conjunction with private companies, has been working on this since 1979.

We’re all familiar with the GAU-8 Avenger. It’s the Gatling gun designed specifically for the A-10 Thunderbolt II, which ironically was designed around the gun. For the longest time, the A-10 was its only application. Until now.

The Goalkeeper is used by the following Navies around the world:

The Goalkeeper is a Dutch CIWS (close-in weapon system) which is totally autonomous. It uses radars and the latest electro-optical systems to scan the area around the ship for threats, selects them, and then destroys them. It does all this without any human input.

From missiles to pirate ships, this system can defend the ship from most threats. The fact that it uses the GAU-8 only makes sure that everything in its path dies.