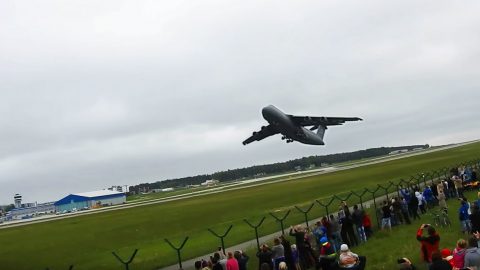 The Sound Of Freedom (And Supplies) Coming In.

It’s true, just check out the picture below.

In this video, you’ll see this behemoth taking off in a very quick way. Although its takeoff roll is about 8,400 ft., this seemed a bit shorter (there’s really no way of knowing from the video, but it didn’t seem like the plane was in motion for that long before being airborne.)

One thing to notice is the sound. Although the new Super Galaxies (C-5Ms) have newer engines, namely, General Electric’s F138-GE-100s which are quieter, they still sound hauntingly loud.

We recommend you start this video at a low volume and adjust it accordingly, because once this thing gets up and going it could really pierce your ears.