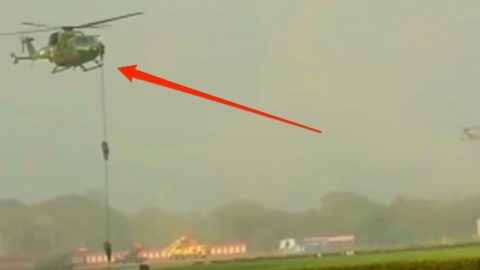 FIlms and TV often have depictions of highly trained units leaping from helicopters onto ropes in an act called slithering. The act used in real life units using it as a means of entering combat zones from helicopters. It takes a lot of training to pull off this intense feat but even the best soldiers know the dangers of slithering and a few found out the hard way.

While conducting a slithering exercise three Indian Army Personnel were injured as their cord broke while leaping from an Advanced Light Helicopter (ALH). Experts are citing the cause of the accident as “material failure” more than likely the metal used to hold the rope snapping.

“With equipment like this, we don’t need an enemy to kill our soldiers ALH almost ends up severely maiming 4 Special Forces soldiers when the boom broke in Republic Day practice.”

There is still no word on the extent of the injuries sustained by the Indian Army Servicemen nor is there anyone taking responsibility for the incident. Video of the tragic incident can be seen in this clip as we hope a speedy recovery from the three injured men who fell from this helicopter.