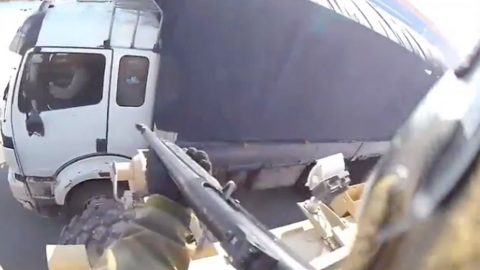 In the latest U.S. military headlines, a video of a U.S. soldier shooting through a truck’s window in a drive-by like fashion is flooding the internet. The story was first covered by Politico on January 10th, 2018 without any concrete evidence of anything except for the footage, but whichever way one looks at it, it didn’t look like standard rules of engagement.

“We are conducting an investigation into this video, and will take appropriate actions as a result of this investigation.’- U.S. Central Command via POLITICO

The entire 3-minute video first surfaced on YouTube just a few days prior and was a complete montage war footage typical of U.S. soldiers shooting with a helmet-mounted camera. It has since been taken down due to its popularity, but the clip of the incident was ripped from it and put on independent servers, including the one you’ll see at the bottom.

Although it looks bad, absolutely nothing about this is known as of now. The driver might have been a civilian or might have been a known insurgent. In war, nothing is as it seems and it’s easy to call this “murder” without knowing all the facts.

We’ll continue following this story and report back to you as soon as the DoD releases its findings.