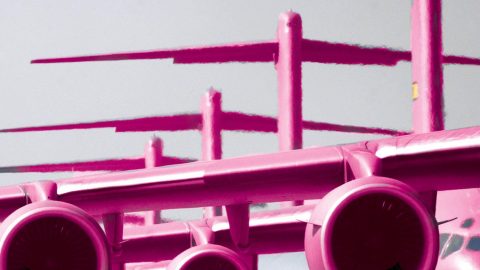 Why? Because Why Not.

So here’s the deal. Sometimes you get something into your head and just can’t get it out. We were having a discussion about what some of our favorite planes looked like back in the day with different camo and someone threw out an idea that it would be weird if we had pink planes.

At first it was just a “haha” moment but unfortunately it stuck around long enough for one of us to go ahead and do it. One plane turned into two and we got enough chuckles out of it that we decided to go ahead and do some more. Also, some of us have an addiction to photoshopping random things, so this was actually quite fun to make.

Maybe some of you won’t find this that funny, but hey, humor is selective.  In that respect, some might get a laugh out of this while others will think this is the dumbest thing we ever did. F-16 Fighting Falcons are a classic, so why not kick this thing off with them. Where else are you going to see a behemoth C-5 Galaxy…in pink? That’s right. Right here. Wonder what she’s got in there? Maybe Valentines Day candy? (It’s about that time of the year by the way.) We have a feeling some of you may want to rip us a new one with this one. How dare we make the almighty A-10 pink? Well, answer us this? What’s worse than getting killed by Warthog? Yup, a pink Warthog. We’re not big on pink, but got to admit that F-22 Raptors don’t look too bad like this. Just sayin. One of the most iconic bombers, the B-52 Startofortress might not look so intimidating in pink, but still can drop about 70,000 pounds of bombs on your head so be careful what you say to her.